The other day I told some of my younger neighbors that I was born on the original Memorial Day, and they both asked when that was – “the first part of May?” I continually forget that a growing number of people have no recollection of the 70s, including the National Holiday Act of 1971 that moved the holiday from May 30th to the fourth Monday of May. While checking out the Watergate, but before visiting China, Richard Nixon and Congress enacted this important bill to give weary workers one more 3-day weekend. (Now THAT is worthy of a legacy!)

Anyway, I found it interesting that as a little person, when I proudly announced that I was born on Memorial Day, the usual response was one of  pity that I was sentenced to celebrating my special day in cemeteries among relatives both living and dead.

But I loved it!  Surrounded by oodles of uncles, scads of aunts and dozens of cousins, I was the center of attention for the few minutes it took to sing “happy birthday” and share congratulatory hugs, kisses, and wishes. And Uncle Don or Uncle Jack never forgot the highlight – birthday spanks, one swat for every year. (Sometimes cousins created “the spanking machine” – a line-up of kids, standing so I could crawl through a tunnel of legs, and then get a whack from each one as I passed under! OUCH!)

We observed most Memorial Days in Arimo, Idaho where my mother was born and raised. Her oldest sister Annie still lived there, and deceased family members were buried in Arimo or in nearby Marsh Center. Only 30 minutes from Pocatello, we arrived at Aunt Annie’s tiny house by mid-morning to find Chevys and Fords parked helter-skelter along the narrow street. Late-arrivals poured from the vehicles; children scrambled over the lawn; women toted filled Pyrex dishes and Tupperware to the kitchen; and men hauled plastic, webbed folding chairs from trunks, station wagons, or truck beds.

Hugs, kisses, handshakes, along with pinched cheeks, tickles, and tosses in the air by uncles and aunts created a cacophony of squeals, giggles, and groans. Later on, skinned knees and childish skirmishes added tears and tantrums to the disrupted harmony, but that initial welcome was joyous.

Of course, the first event of the day was a trip to the cemetery that

was nestled among old trees and pastures just a few blocks away. The graveyard was a small one, and Mom knew nearly every name on every headstone.  Cemetery etiquette dictated that my little sister and I tip-toe around the mounds or risk offending those laid to rest. We had seen enough scary movies to know that insulting the dead was a dangerous chance to take.

Our relatives’ headstones stood close to a line of trees, bordered by barbed-wire fencing. The neighbors, black and white cows, silently watched the women rearrange lilacs, peonies, irises, or roses in foil-lined coffee cans before placing them around the grave-sites. In the meantime, the men pulled out lawn clippers and weed-diggers to trim the overgrown grass and attack invading dandelions.

Quiet talk, mixed with laughter, emanated from every cluster of kin as each reminisced about this uncle or that niece. Sometimes silence prevailed as each slipped into his or her private reverie. Back then, I didn’t know all of those buried in the rural graveyard, but I knew bits and pieces of their stories because the tales were rehearsed as we stared at the names engraved upon granite, testifying of their births and deaths.

After the tributes, we headed back to Aunt Annie’s to eat, visit, laugh, play games, and pose for pictures. Not long ago, Mom printed a copy of one of those family photos. Although the picture was snapped on the occasion of Gramma and Grampa’s 50th anniversary, and the setting was at Uncle Russell’s and not Aunt Annie’s, it is reminiscent of Memorial Day family reunions.

The grainy quality obscures some of the details, much like my fading memories have also obscured the details of that time. Nevertheless, I can’t peruse the faces without piecing together recollections of those late spring days when we renewed our affection for one another. Here are a just a few bits and pieces …

Patriarch and Matriarch of the Howe Clan!

Fred and Rebecca Howe were parents to 13 children! I remember sitting on Grampa’s lap, knowing I get to help him roll his cigarettes, and then he rewarded me with puffy pink mints. While in Arimo, Gramma was the president of the Relief Society for eight years. In Pocatello, my sister Connie and I would sometimes go to Relief Society “work days” with her. Other times, we listened to soap operas on the radio with Gramma while she crocheted. I also remember that before Mom picked us up, Gramma made us scrub our hands and faces and she arranged our hair into ringlets. There we were: bright and shiney faces, curled hair, and dressed in grubby jeans and dirty plaid shirts.

In this picture, you can see that my tall, handsome daddy is standing behind my Uncle Leonard and his wife Iva – who is still alive at age 100! Aunt Nita was married to Uncle Dutch. (Note the “Kodak” she’s holding.) Aunt Annie was the hostess of these Arimo events – soft spoken and so sweet – she was married to Uncle Horace, one of Grandpa’s smokin’ and fishin’ buddies. Annie often showed off evidence of their tobacco habits, found on the bottoms of the kitchen chairs where they struck their stick matches to light up. Aunt Arvilla lived with a broken heart for most of her life. Struggling through a rough marriage and near-poverty, she also watched her little red-haired daughter Elaine suffer through a hydro-cephalic condition until she eventually died. I didn’t know Elaine, by Mom’s stories of her always touched my young heart.

The Triple Threat - Trouble-makers All!

As teens, these three uncles turned Gramma’s hair gray! Uncle Pete’s real name was Clarence, but he earned his nickname because his younger brothers mimicked everything he said and did. Consequently, he was “Pete,” and the copy-cat sibling was “Re-Pete!” All three were rascals, often getting into fights or causing other kinds of mayhem. But Gramma loved these trouble-makers, and pity the girls that tried to come between her and her boys!

Aunt Margaret is my dad’s younger sister, and she was married to one of

Seeing double, as in cousins

the rascals – Uncle Reed, my mom’s brother. So that cute little dark-haired girl, held by Aunt Margaret (left)  is my double cousin Julie! She and her brothers Steve and Fred, along with her sister Janeen (the “bun in the oven” in this picture) were so close to Connie and me that we considered them “almost brothers and sisters.” Fred – tucked in there at the bottom right – was such a sweetheart. I loved to write little plays for holiday programs. I often cast Fred in them, and patiently, he always went along. My favorite was the year he played Santa Claus to my Mrs. Claus. (Connie, Julie, and Janeen were elves, of course!)

Uncle Jack (top right) is holding his darling adopted daughter Jackie. I was fascinated with whole adoption idea, and I often wondered about Jackie’s “other mommy and daddy.” Life took a harsh turn for Uncle Jack and Jackie when my very shy Aunt Violet suffered a breakdown. In spite of their trials, Uncle Jack was always a jovial teaser, and Aunt Violet was always a kind daughter-in- law to Gramma.

And then there was Stephen, the pest, the tease, the show-off. How is it that little boys can make little girls feel silly, clumsy, and stupid within 10 seconds of their arrival? I don’t think he noticed me until I turned 12, but who could avoid noticing Steve? Look at him! The poster boy for “Pain in the Neck!” How could I know that one day I would come to admire the big galoot? We’re both teachers, and when we get together, we love to talk shop as well as remember old times. He’s a dear.

Uncle Dutch, upper left, lived in Idaho Falls. His given name was Matthew, but his attempts at learning to talk came out in gibberish. Of course, someone accused him of sounding like a Dutchman; hence the nickname. Cousin Beverly, left, and Maxine, far right, were Aunt Annie’s daughters. Because Annie was 20 years older than Mom, her daughters were nearly the same age as my mother. Hefty Aunt Ida, in turquoise, was married to my slight uncle Pete, and they enjoyed each other so much. Lots of love and teasing made their marriage work.

Am I hiding from Steve or is the sun in my eyes?

I think I’m sitting next to Bonnie, Uncle Pete and Aunt Ida’s daughter, in this picture.  We were the same age,  and I visited her home in Atomic City where she attended a one-room school. I had just completed first grade, and when I went with her to school, I told the teacher to seat me with the second graders – very confident that my multi-room school was more advanced than this country version. Humility was my teacher that day when these kids whipped out their readers and I could hardly decipher one word. Years later, Bonnie was honored as Utah’s Poet of the Year, and when she signed her book for me, she wrote, “All the years I was jealous of you. Now we’re grown and I appreciate and love you so much.” Bonnie died a year later at age 36 from complications of diabetes, and I’m so sorry that she was ever jealous of me. (I often shared her poems in my English classes. “The Provider” her poem about Uncle Pete is my favorite!)

This striking couple is my Uncle Lloyd and his new bride Gerri. Lloyd was number 13 in the big family, and Gerri was the oldest and youngest in hers. I was a flower girl at their wedding and wore a dress truly fit for a princess. I remember staying with them once in a while, and they even took Connie and me to a drive-in movie. I think it starred Charleston Heston and a million carnivorous ants!

This young lady was the darling of my aunts, uncles, and grandparents. Beckie Sue’s white-blond curls and sparkling intelligence endeared her to everyone. Three years older than me, she was my idol, and for years, I tagged after her in hopes of becoming just like her! I loved going to visit her in Twin Falls, and the rural setting of her home made me think of her as Shirley Temple starring in Rebecca of Sunnybrook Farm.

Interestingly, I can’t find Beckie’s mother or father in the photo. I think Aunt Wyoma probably volunteered to take the picture. I suspect that Uncle Don is in the crowd somewhere because I can still hear him calling me his favorite nickname – Beartracks – a variation of Barrett.

I believe her sister Mary Lou is sitting to the left of Connie (our right) in an above photo. At age 10, Mary cracked me up when she and Jackie demonstrated “The Swim” – a dance that demanded swiveling hips, arm-strokes, and a serious facial expression!

There are so many more memories and stories, but regardless of our family’s overwhelming numbers, each person created a unique and significant impression upon me. Those Memorial Days we spent together over the years are as important as any of my days on earth. Many of these loved ones are gone now, but when I pull out the pictures, I pull out the memories, and piece together the feelings and joy associated with each one. 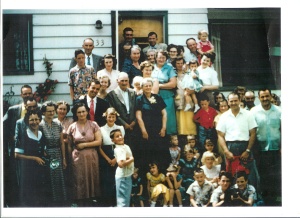