Memories of Daddy
By Henry and Rebecca’s Daughters

My sister and I shared these thoughts at Daddy’s funeral 2 years ago. I decided to “post” our love with any readers who stop by tomorrow on Veteran’s Day. He bravely served his country and loved the USA deeply. We ARE so proud of him. 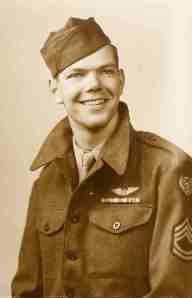 As I sat at Dad’s bedside these last few days, I held his hands in mine. I tried to memorize what they looked like so I wouldn’t forget them. I began to think about all of the things he did with those hands during his life time.

For those of you who think of my sister as the shy little Connie B., let me tell you that you don’t know Connie, the take-charge nurse! After Daddy’s passing, and we decided we wanted to speak at the funeral, she said she thought of talking about Daddy’s hands. Then she added, “And I thought you could talk about his feet.” No one says no to Nurse Connie; so my talk today is about Daddy’s feet and where they took him throughout his life.

When Daddy was three-years-old, those little feet powered his stick horse. But one day that little stick horse fell into a canal that ran along Thirteenth Avenue near his home in Pocatello, Idaho. When Dad reached in to grab his toy, he fell in. Luckily, he was with his little buddy Don Robinson who grabbed Dad’s clothes, held on and screamed until his mother came. We’ll be forever grateful to Don for saving Daddy’s life so that we could spend so many years with him.

While a young boy, he would fold the Pocatello newspaper neatly into a square; the last corner carefully tucked away so when he tossed it onto a porch from his bicycle, it wouldn’t fall apart. H rode all over Pocatello delivering those papers.

Yes, after so carefully folding all those copies of the Idaho State Journal, Dad’s feet peddled his bicycle up and down the streets in the early morning hours. But on Sunday, those feet walked to and from the Pocatello 2nd ward of the LDS Church where he attended Sunday School and Sacrament meetings. As a young deacon, those feet walked the aisles as he passed the sacrament, but as a teenager, he trudged up and down the bleachers at baseball games, selling popcorn, peanuts and beer to all those rookie league fans. Until one day, the Pocatello East Stake president attended a game and told Dale a priesthood holder should not be selling beer. Dad quit the job soon after

He used those talented hands to learn to play the trumpet. Along with his brothers and sisters, he played in the Barrett Family Band. They played all over southern Idaho, even on Christmas Night, which didn’t make him too happy. But this did start a life-long love of music.

His hands struggled to perform algebra and geometry problems – oh, how he hated math! A trait he passed onto his daughters – “Thanks, Dad!”

Yes, as a member of the Poky High band, Dad’s feet marched in bands at games and in parades. Once part of the “best trumpet trio in Idaho” – as stated by his sister and our Aunt Margaret – he stood in the Mormon Tabernacle to perform as part of that trio. A few years later, his feet tapped out the beat of swing songs and serenades as part of the Gene Burton band – Pocatello’s version of Glenn Miller’s or Tommy Dorsey’s bands. They frequently provided the music for dances at Idaho State University.

After graduating from Pocatello High School in 1942, his hands signed his enlistment papers in February 1943 when only 18 years old. As a member of the Eighth Air Force 379th Bomb Group, he flew 35 missions aboard a B-17 Flying Fortress. Because he was so tall, he became the top-turret gunner, using his hands to defend the country he loved so much.
At 18, he feared his flat feet might keep him out of serving his country during World War II, also known as WWII – the Big One. Actually, his love of Coca Cola almost prevented him from being inducted. During his physical, the doctors determined he had albumen; so his family doctor ordered him off Coke for a week and that did the trick.

During the war, Dad proved he had no feet of clay as he quickly moved from one end of that B-17 to the other to keep it in flying order. This was no easy task because often times the bomb bay doors jammed and he had to hand-crank them open with very little between him and the wild blue yonder. Those feet rushed him safely from two crash landings – both occurring during his first two missions. Once I asked him how he dared go up for a third.

On one occasion, he saved a buddy’s life in a most unusual way. A grandson of this crewmate wrote Dad to thank him for saving his grandfather’s life. It seems this young bombardier failed to dress in his heated underwear prior to one of their flights. It gets very cold in those planes, and after performing their duties, Dad held his friend on his lap, wrapping his arms around him to keep him warm until they returned safely to base.

(Today we are honored to have one of Daddy’s crew members with us in the congregation. Paul Lineberry served with Dad as a ball-turret gunner on those 35 missions! We greatly appreciate his attendance here today.)

At the end of the War, he sent home on leave. His sister Margaret wanted to line him up with her good friend from work. Upon picking them up at the shuttle stop, Dad took one look at Rebecca Howe, and it was “love at first sight” for both of them. A few weeks later, he took her hand in his, and placed a gold band upon her finger, and she did the same to him. That gold band remains on his hand to this day, a bit worn but a great symbol of their love for each other.

On February 5, 1966, he took my mother’s hand in his across our Heavenly Fathers sacred altar in the Idaho Falls Temple, and there they were sealed as eternal companions.

After completing a successful tour of duty, he returned home to Pocatello on leave. Those feet walked on air when he met that 5’3” brunette, Becky Howe. Not long after meeting her, he knocked her off her feet when he asked, “Where have you been all my life?” From anyone else that may have sounded like a great pick-up line, but from my dad, it was tender and sincere. He fell in love with her the minute he saw her and he never stopped loving her. His last conscious expression was to confirm his love for her and to pucker up for one final kiss.

After a few years of marriage, Dad became a father. His large hand gently held his tiny daughter Renae. Two years later, on the day before Father’s Day, I was born. Daddy was always so gentle and kind. He loved his girls so much, he could never use his hands to spank us.

When he would get home from work or a business trip, I would run and jump into his arms. He would pick me up, and I would hug him tight, give him a kiss, and then I would always ask him, “Any gum, Chum?” Sometimes I got it; sometimes I didn’t, but I always got a kiss.

Through the years, Dad’s feet walked the floors with his baby daughters and wandered around the kitchen as he cooked our daily breakfasts or whipped up a batch of donuts. Yes, donuts. Dad loved to deep fry that yummy snack, and I especially liked the donut holes.

Dad would hold our hands as we tried ice skating; his hands steadied a wobbly bike so a seven-year-old could learn to ride; and his hands tucked us snuggly into bed at night.

Dad used his hands to cut up fruit, but being an Idaho boy, he also loved to cut up potatoes and eat them raw. One morning Mom looked over at his bowl of cut up fruit and noticed he had added raw potatoes in with the apples and bananas! Whenever I invited Mom and Dad up for dinner, I made sure I cut some raw potato just for him.

Daddy loved to put many miles on his feet in community service as he and Mom worked with good friends for good causes as part of the Pocatello Junior Chamber of Commerce. We have one picture of this group raising money for the fight against polio. In later years, he served shut-ins through the “Meals on Wheels” program. His feet also walked the halls of a Banning, CA elementary school to tutor struggling students.

In fear of making Daddy sound too perfect, I thought it only right to mention Dad also had a lead-foot. We could make the two-hour drive from Pocatello to Twin Falls in an hour and a half, and it only took 15 or 20 minutes to get to Arimo. Those speeding tickets created a slight bone of contention between Mom and him. Dad’s feet were even behind bars once and Mom had to bail him out – not because of unpaid speeding tickets, but because of unpaid parking tickets.

His hands took great care of every yard he owned; put up an American flag, and covered his heart to honor his country.

As Connie and I grew up, he stood as a witness at our temple weddings, stood in the blessing circles of babies. With feet planted firmly on the floor as he sat, he held each little one on the length of his long lap.

During the past decade, Daddy’s feet betrayed him as he suffered from neuropathy. Nevertheless, he never gave up walking – first with a cane and then with a walker. Only the last week of his life did he stop walking.

It mattered not that his feet failed, he always stood firmly beside Mom and she beside him. She tenderly served his every need as he struggled to fight his infirmities. One of Mom’s final acts of service as he lay dying was to rub his feet and his restless legs. When nothing else soothed them, that did, and she told us how he loved that sweet act of love.

One of the last things I saw Daddy’s hands do was when I stood at the foot of his bed, he looked at me, pointed his finger right at me. I pointed back and he said the last words I remember him saying: “Connie B.” That little action meant the world it me; it said to me, “I love you Connie B.”

As Connie and I close, Mom, Connie and I want to thank Heavenly Father for the great blessing of having Daddy in our lives. Henry Dale leaves the greatest legacy of all – a family who loved and adored him.

We are also thankful for a Savior who, upon his resurrection, said to his disciples, “Why are ye troubled? And why do thoughts arise in your hearts? Behold my hands and my feet, that it is I myself; handle me, and see; for a spirit hath not flesh and bones, as ye see me have. And when he had thus spoken, he shewed them his hands and his feet.”

I have no doubt that my sweet father is with the Savior this day, and that he is wrapped in the loving arms of his parents, his siblings and members of Mom’s family as well. For they all loved him so much.

4 thoughts on “Thankful for Daddy, Our WWII Veteran”