I don’t know which came first – the “calling” or the blackboard. Early in my growing-up years, my sister and I received a small blackboard – probably for Christmas. For years it hung on the wall of  the “play room” down in our basement, and it was one of my favorite “toys.” I don’t know if Mom and Dad or Santa gave it to me because I loved to play school or if I loved to play school because I owned a blackboard.  Either way, I knew I wanted to be a teacher when I grew up.

My favorite student was my sister Connie, but sometimes I corralled my friends into sitting in  my classroom, too. I think spelling and arithmetic were the two main subjects taught because I remember filling the blackboard with addition problems and spelling words. I LOVED being in charge, bossing around my inattentive students, and WRITING ON THE BOARD! Interestingly, the learning sessions never lasted long, and if I sent the “kids” out for recess, they didn’t come back.

Occasionally, I reconsidered my answer to the proverbial question: “What do you want to be when you grow up?” After being introduced to Nancy Drew books, for example, I dreamed of being a detective. I spent more than one summer sleuthing for clues to concocted mysteries. When I found large footprints in the flower beds, I told Connie and my friends Leah and Diane that I was certain a window-peeker or a robber was lurking about the neighborhood.  (The fact that my father may have created them while removing the storm windows was totally irrelevant. ) And if I couldn’t find additional supporting clues, I created and then discovered them: mysterious and threatening notes written in disguised handwriting or  anonymous phone calls that disconnected after being answered, a prank easier to pull off in the days before caller ID.

Connie may have been a little nervous the first time I tried to convince her that we might be in mortal danger, but after “crying wolf” 3 or more times, she brushed off her older sister’s claims as another indicator of an over-active imagination.

Another career consideration, kind of linked to my detective dreams, was becoming a lawyer. Not the kind of attorney who defends divorce

clients or tax evaders, but rather the lawyer who takes on innocent victims, wrongly accused. The criminal attorney who battles against the arrogant prosecuting attorney and the incompetent police detective; the articulate courtroom lawyer who can pull a witness-chair confession from the real murderer minutes before the case goes to the jury! Yes! I wanted to be PERRY MASON!

I knew I’d be good at that profession because I represented myself in traffic court at age 16 and WON! I had been ticketed for pulling into the path of an oncoming car as I navigated a 1949 DeSoto from its parked position against the curb. Using my training as a high school debater and orator, I wowed the judge as I recreated the events of that winter morning. By moving around the plastic cards on the magnetic board, I showed the court how I had to swing out  the nose of my grandpa’s old car before I could pull into traffic. Because the emergency brake did not work, I was thus forced to keep the front tire 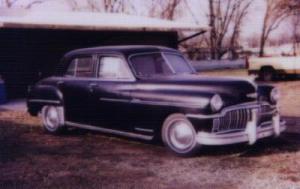 turned into the curb to stop the car from rolling down hill. (If this is confusing, don’t worry because the clinching evidence is yet to come.)

I claimed that my neighbor had zoomed down our street at a slightly accelerated speed and did not see the DeSoto’s front end poking away from the curb because her car WINDOWS WERE ALL FROSTED OVER except for a TINY circle  that she had scraped away! Upon impact, I pulled my foot off the clutch, the engine died, and I coasted across the street until the opposite curb stopped OLD BLUE.. Based upon the location of my car, I understood how the police could deduce that I might have  pulled out into the path of the oncoming car, but I HAD NOT! Why even the damage to my vehicle was on the left SIDE fender near the headlight, and if I had pulled out into HER path, wouldn’t the CRUNCH be found on the left FRONT of my car, maybe even smashing in the headlight?

“Therefore, your honor, I ask that all charges against me be dropped, and I rest my case!”

After a few questions and a short deliberation as the judge looked over the citation and accident report, an INNOCENT verdict was rendered. I did NOT have to go to jail; I did NOT have to pay $200; and I did NOT have my driving privileges revoked by the court OR my parents! YaY!

The final occupational option – which I did not seriously consider, but thought  about just the other day – was a career in radio. I can’t really remember listening to any female disc jockeys or news casters back in the 1950s or 60s, but I actually worked as one for a few weeks when I was a junior at Highland High in Pocatello, Idaho. KWIK radio station, which was the station kids did NOT listen to, featured a Saturday morning high school wrap-up, and I was hired for NO money to remind listeners about upcoming school events and report how our HHS Rams fared in sporting competitions, debate tournaments, award recognitions, etc. I had to write the stories and report them LIVE. The gig didn’t last long, not sure why not, but it did give me a taste of writing and reporting.

I hadn’t thought about this experience for years, but a little over a week ago KSL radio interviewed me about a story that ran in Education Week. The story was about teachers reading aloud to teens, and since I had posted a blog on the same subject, my boss referred Mary Richards, KSL reporter to me.

After interviewing me for about 25-30 minutes, Mary shared a 10-second story and used a 2-second soundbite from our interview. My 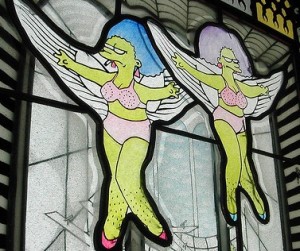 voice sounded TERRIBLE. Very nasal. But when I went online to read her entire report and listen to an extended recording of her story, I was even more mortified. I seriously sounded like Patty or Thelma, Marge Simpson’s sisters – you know the two chain-smokers who would be very dead now if they weren’t  cartoon characters. Now I am NOT nor have I EVER been a smoker – except that time in 8th grade when I thought I’d give it a try. My gravelled voice resulted from the onset of a coughing, hacking cold that still lingers!

The point is that my first choice of a profession was and still is the right one. I struggled to earn my teaching degree and my masters. I have always and still LOVE working in education with students AND teachers. I am sad that my school district is in such bad financial condition, but I won’t turn to detective work, go to law school, or audition for KSL UNTIL I’m kicked out of the profession. (And let’s hope the legislature doesn’t bring that possibility to fruition!)