Today I introduced several of my grandchildren to WELFARE BUNNIES. Back in the day when their daddies were younger and lived under my roof, I started a mini-tradition that still shows up on occasion.

(I suggest you double-click on the above photo to capture an “up-close and personal” peek at these critters!)

Because my 4 sons were outgrowing Easter baskets, the BUNNY brought them either clothes or games or movies, all arranged neatly throughout the livingroom. Those items cost a bit more than chocolate rabbits, Peeps, and Buns, so I put Easter Bunny (E.B.) on notice: “Do NOT bring lots ‘o chocolate and charge it to my credit card!”

To ensure that Mr. LongEars stayed under budget, I created little bunny bags made out of paper sacks, thus limiting the amount of malted eggs, jelly beans, and those Peeps and Buns.

As years passed by, non-edible gifts were often eliminated because of the high cost of high school or little league baseball, college tuition, missions, etc. Nevertheless, the bag bunnies still showed up on Easter morning.

Somewhere along the bunny trail, our third son Joe referred to the paper-sack creations as “welfare bunnies” because their appearance coincided with tough economic times for our family. I cracked up because that was NOT the reason for their creation. I just thought the boys were too old for those green, blue, and yellow woven Easter baskets.

Through the years, I continued to make paper-sack bunnies for my sons – even sent them to the mission field, designed with Mormon missionary nametags – and my daughters-in-law received one or two as well. A few times, I designed some for the grandchildren, but TODAY I decided to teach Taylor, Spencer, Mia, and Connor how to MAKE the infamous WelFareBunnies.

But first we had to DYE the EGGs! 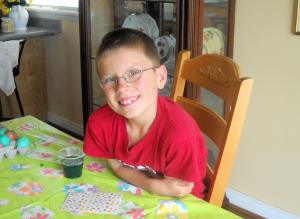 Four – or was it 5? – CRRRacked eggs later ~ The FINISHED products!

Another fine photo by Miss Taylor!

The WelFareBunnies AND their Creators!!!

Wondering why there are 6 bunnies and 5 kidlets? Carter was counting sheep while his brothers, sister, and cousins partied! Thanks, Spencer for making a bunny for him; and thank you, Taylor for creating one for Evie! We missed you, little man!