While visiting Layton Hills Mall in search of a Chick Fil A, I wandered past a kiosk cart and committed the cardinal sin of avoidance: I made eye contact with the sales associate. I know better. BUT this sales person was not the run-of-the-mill Utah-mall cart clerk. He was Jewish. And 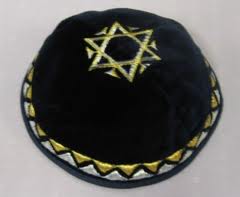 What every good salesmen should wear.

how did I decipher that? Because he was wearing a yarmulke/kippah/skull cap! A dead give-away. Maybe I should say a DEAD-SEA give-away because the young man – probably early 30s – was selling Dead Sea salt scrub and other related products.

Before I knew it, I was scrubbing my hands with the product and listening to Jewish jokes – I think they were jokes, not sure, as they were mixed in with “You’re killing me, Renae;” and “Are you Jewish? I thought maybe so because you’re so cheap.” (Not sure how to take that because I hadn’t uttered a word at that point except to tell him my name. Was he stereo-typing himself or insinuating that I looked sleazy?Because he ended every comment with “just kidding,” I decided not to take offense. Maybe he was trying out jokes on his way to stand-up comedy or something like that.)

After a few more jokes(?), another demonstration, 4 descriptions of the wonder products, a list of the “regular” prices, followed by “but I can give these to you for this much,” 2 attempts to decline the generous offers, I CAVED. But I didn’t buy all four treatments – just two. A minor victory. And while I didn’t get a “deal,” I didn’t pay more than the Internet price either.

While I don’t know if Dead Sea salt is any better than table salt, sea salt, the Great Salt Lake salt, I do 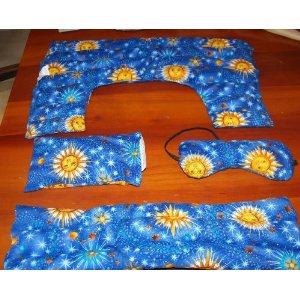 This set sells for $59 on Amazon. My daughter-in-law makes them, but they are filled with rice for $.59 - if that.

know I’m a patsy for salesmen who wear yarmulkes. You see this is the second time I’ve fallen for a pitch delivered by a Jewish guy. Last time I bought one of those herbal heat wraps that you throw into the microwave to warm up before soothing your neck, back, shoulders, etc. Or you can chuck them into the freezer to cool off said joints. I can’t remember what I paid for it, but I know it cost more than I thought it was worth. Worse yet, I’ve used it maybe once! WHAT’S WRONG WITH ME?

Do I feel like I have joined the generations of peoples and nations that have persecuted these folks if I don’t buy their products? I’ve heard there is Jewish guilt, Catholic guilt, and I am sure there is also Mormon guilt because I fold EVERY time as I don’t want to offend their religious beliefs, judge their culture, or destroy the fragile peace that hangs by a thread in the Mideast.

What that has to do with body scrubs, exfoliates, or herbal heat wraps, I don’t know. But I’m not taking any chances. And if anyone wants to sell me the proverbial beachfront property in Nevada, just don a yarmulke and sign me up.