Dear Folks at the Ford Company,

This thank-you note is overdue, but I want you to know how appreciative I am of the heroic efforts of our 2010 Ford Edge. With few exceptions, modes of transportation rarely inspire sentimentality within me, but our SUV is one I will always remember fondly.

On an October night, 2014, my husband and I traveled west to visit our son’s family in California. This is a well-worn route for us dating back to the 60’s, and NEVER in that time have we noticed deer – live or dead – along I-80. We figured the creatures must lurk somewhere, however, because warning signs and a state-of-the-art deer crossing served as evidence of the possibility.

Not long after leaving Wendover, Nevada, the two of us chatted about that very topic and even commented that we better stop talking and be on the look-out for deer because the desert night was growing ever darker. Within a few miles, a huge suicidal buck with our number somewhere on his person instantly appeared in the middle of the highway, staring us down, and daring us to send him to deer heaven.

With ninja-like reflexes, my husband of 45+ years swerved towards the shoulder of the road in a failed attempt to avoid the handsome 4-pointer. Few things can make you shudder like the sound of plastic – mixed with a bit of steel – slamming into flesh, fur, bones, and antlers at 68ish mph. Usually a screamer, I silently held my breath until our fish-tailing Edge finally slowed and stopped. (One advantage of traveling in the Nevada desert is the light traffic, and, thank heavens, no other vehicles interfered with my spouse’s defensive maneuvers.)

The next hour was spent assessing the damage to the victims (SUV crunched; deer splattered), calling 911, and reporting the incident to our insurance company. We also noted minor miracles: we actually had cell service – thank you T-Mobile – and the engine of our Edge was still running. Even though the driver’s side was pretty much “smooshed”, the airbag didn’t deploy (yay), and dangling bumper parts didn’t gouge the front tire or impede it from doing its job.

Upon his arrival, the highway patrolman confirmed the deer’s demise was a quick one, and then he assisted us in removing pieces of yukky debris hanging off the Ford. In the meantime, the engine still hummed. Once the patrolman gave us the go-ahead to drive to Elko instead of waiting for a tow company, we traveled 75 miles to our destination with nary a glitch. No engine malfunctions. No more crazy deer.

Because of the late hour, we checked into a motel. The next morning the “deer-slayer” started right up, and we drove to Top-Gun Auto Repair. The manager was expecting us, but he was shocked to see that our brave SUV made it to his establishment under its own power! 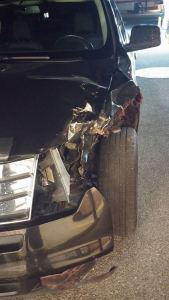 At first he thought the Edge could be repaired, and we were thrilled because we really liked that SUV. The ride was smooth and quiet, the seats were comfortable, and most importantly, the vehicle was well-built. It handled so well when my husband played “chicken” with the buck; and the fact that the engine “just kept on ticking” saved us hours of waiting for a tow truck and enabled us to keep the heat operating so we were warm against the cold of the desert night.

In the end, our 2010 Ford Edge couldn’t be saved. Internal damage was too extensive, and we mourned the loss. But once the diagnosis was confirmed, and we knew we had to purchase another vehicle, there was no debate. We found a suitable replacement for that mighty deer-slayer that will always have a place in our hearts: a 2013 Ford Edge LIMITED! Oh yeah!

So we thank you Ford Folks in Detroit for building such a fine vehicle, and thank you personnel at Ken Garff Ford Dealership in American Fork, Utah for treating us so great both times we bought our SUVs!

P.S. If you want us to publicly endorse your fine product, we will be proud to do so – but not so proud that we would refuse a little compensation. (Wink, wink)

One thought on “Our Ford Edge: The Deer-Slayer’s Sacrifice”