Last Sunday started like the Sunday before that and the Sunday before that. G.E. and I slept in. Upon waking, I wrapped up in my favorite robe and he dressed in his comfy sweats, or “daytime jammies” as I call them. Next I stirred around in the kitchen while he sat at the bar and poured over the Sunday paper, and then the phone rang.

Within a few minutes we learned that a loved member of G.E.’s extended family had received a life-threatening medical diagnosis and was scheduled for surgery within hours. We quickly cleaned up and headed to the hospital where we greeted many family members who had gathered together in love and support. The well-wishers filled the room and spilled into the hallway. Smiles and laughter intermingled with tears and hugs. It was a warm sight and an even warmer feeling.

Everyone stayed in the waiting room while our loved one was in surgery, and so we were there to hear the surgeon report the results. They were pretty much what he predicted they would be. Silence descended and quiet tears, followed by hugs and more hugs.

And now the trials of faith. Prayers will ask Heavenly Father for a miracle, for our family member to beat the odds, for “the cup to be lifted”. We know those things could happen. But we also know the miracles could take other forms as in added grace. Our Father in Heaven did not intervene in Gethsemane, but He sent an angel to comfort the Savior, and so we’ll look for the attendance of angels and increased love flowing from family and friends in heaven and on earth to buoy up that dear family.

As for the extended family, I am very grateful that G.E.’s siblings have met for dinner several times a year for nearly a decade to strengthen ties. We’ve held yearly reunions to include children and grandchildren for the past 3 years. Those traditions made it natural and comfortable to rally together during this time of need. We are not strangers to one another. When life turns on a dime as it did this weekend, that is a wonderful comfort.

She contemplated her sisters as they gazed at odd couples attending the party – Ron and Hermoine;  Bella and Edward; Piggy and Kermit.

“It was happenstance that they met,” said Coincidence.

“You know what transpired after that was destiny,” said Fate.

“And it’s phenomenal we’re even having this discussion,” said Miracle. 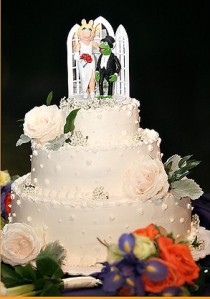 We welcomed family, chowed down neighbors’ goodies, cooked many meals, wrapped piles of presents, listened to and sang clusters of carols, and witnessed a minor miracle. It actually started in 8th grade when I took chorus at Alameda Junior High because I learned the year before that I liked art, but I was NOT much of an artist. That left only one elective course to choose – chorus. I enjoyed singing but knew I was no more a singer than I was an artist or dancer!

All chorus members were girls because boys were automatically promoted to advanced choir, but I still liked the class. I especially enjoyed preparing for concerts – the best of which was the Christmas concert. You see, between 5th and 8th grades, Christmas lost some of its magic because I had joined the ranks of Santa-doubters. As much as I missed the anticipation of the old saint’s arrival and the hopes for granted wishes, I didn’t know how to revive the sparkle that so once filled the days between Thanksgiving and December 25th. (That was a time when the REAL holidays did NOT start with HALLOWEEN.)

As we learned Christmas favorites, I felt that joy I longed for.  I can even remember the songs we sang: “Sleigh Ride” and “Carol of the Bells.” I also recall that our concert band performed “Parade of the Wooden Soldiers,” and Freddy Sherman, my 7th grade crush, played a fantastic trumpet solo! At age 13, I found out about the power of music to elevate moods and inspire hearts and minds.

Fast-forward a few decades to age 50-something and change locations to Lawrenceville, Georgia. Being far from children, grandchildren, parents, and old friends during the holidays, I felt that familiar melancholy creep back into my life. As I decorated the house and prepared for Christmas, I cranked up the carols and felt my spirits lift.

When I returned to the wild west some 5 years later, I decided that listening to Christmas music was great, but singing those songs was even better. So I joined the church choir. Hidden safely among enough talented sopranos to hide my occasional off-key misses, I enjoyed the opportunity to “lift up my voice and sing.” Until this year.

The plan was for the choir’s women to sing a lullaby by Frederick Keel, entitled “Lullaby.” Unfortunately, the director broke her ankle and we lost a month of practices! Upon her return, many women felt the piece was too difficult to perform with so little time to master the technicalities of the song. But our leader was DETERMINED, and she invited those who could get together to practice at least 5 times to hang in there.

My first thought was to run for the hills, but Sister Libby is my neighbor, my friend, and my visiting teacher (an assignment in our church to build sisterhood.) She seemed desperate enough to need whatever my weak voice could contribute, so I agreed to stay with the other FOUR ladies for one practice and then make up my mind about whether or not to continue.

I was feeling okay two-thirds of the way, and then the notes climbed and stayed there for VERY long counts. SCARY! I couldn’t hide among only 4 other singers! When one experienced singer said she had never sung such a hard song, I really panicked. Yes, it WAS hard, but it was also one of the most BEAUTIFUL Christmas numbers I had ever heard. So I stayed.

Our performance was not perfect by any means, but I felt we did the best we could do. I didn’t make any mistakes other than those that come from a lack of talent. For an inexperienced choir member who doesn’t even sing in the shower,  I did a pretty good job of hitting and holding those high notes. I was so proud of us, especially of MYSELF. I had NEVER sung with so few people in my life! Why it was almost a quartet!

More importantly, I felt the spirit of the gentle score and the tender lyrics. Once again,  joy found its way into my heart via music. I wish readers could hear the music, but here are the words that touched me during the Christmas season of 2009.

Sleep little King. I am bending above Thee.

How shall I know what to sing?

How shall I know what to sing,

Here in my arms as I swing Thee to sleep?

Kings may have wonderful jewels to bring.

Mother has only a kiss for her King.

Only a kiss for her King.

Why should my singing so make me to weep?

Only I know that I love Thee.

Only I know that I love Thee,

Love Thee, my little one, sleep.