The biggest, blackest lie I remember telling was in second grade. One spring day Mrs. Quidor announced our class was going to organize a pet parade. While nearly all my friends cheered the news, I did not. I think I was the only child who had NO cat, dog, bunny, turtle, or fish to parade around the school.

It isn’t as if I had not owned a pet. Indeed I went through a slew of mammals, reptiles, and birds. Here’s a short history of what I remember:

Rather than to admit that “I was BETWEEN pets,” I reported to Mrs. Quidor that I would bring MY PET MONKEY to the parade, and NO, it was NOT a stuffed monkey, but the real deal. (Please don’t ask why I came up with such an exotic lie. I don’t know. The closest thing I had to a monkey was indeed a stuffed one – Ms. Phoebe B. Beebe, live-in girlfriend to J.Fred Muggs; my sister owned the Freddy version. The two stuffed animals honored Dave Garroway’s guest and co-hosts on the Today Show. Of course, I didn’t know all that then. )

At any rate, I reported the daily shenanigans of the pet monkey to my teacher and classmates. For some reason, Mrs. Quidor sort of went along with the story, asking me questions in an attempt to either trip me up or to guilt me into truth-telling. But I was dedicated to the BIG LIE and continued on until the day AFTER a PTA meeting.

Surprised that Mom and Dad didn’t return and question me about the mysterious monkey that supposedly lived in our house, I thought I had pulled off the ruse, OR that Mrs. Q. decided NOT to throw me under the bus. But when I walked into the classroom that day, she immediately called me up to her desk to tell me that she had chatted with my folks.

“Renae, your mom and dad didn’t seem to know anything about a monkey,” she said.

Rather than fold, I just looked her in the eye, and with tears in mine, reported that my poor little pet had been hit by a car, and I no longer owned a monkey, and therefore, had NO pet to carry, lead, or drag through the pet parade.

I don’t remember her response. I just recall that I was awarded the honor of leading the parade wearing a majorette hat my mom made. Now, here is the irony of the whole incident: a stray puppy wandered onto the school grounds JUST IN TIME for the parade, and guess who got to carry him.

By all rights, this story of dishonest mischief should NOT have ended this way. But it did, and here is a newspaper clipping to prove it! 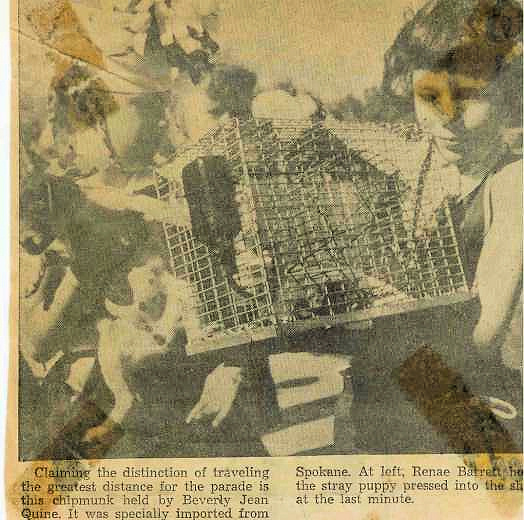