Sometimes I’m gutsy. Not skydiving/bungee-cord-jumping gutsy; not face-lift/Botox/implant gutsy; not cosmetic tatoo gutsy … Hmmm. I’m revising this intro. I am NOT gutsy. Nevertheless, I did experiment with – drumroll, please – HAIR EXTENSIONS! Bet you didn’t even notice. (Only one person did – my boss/friend/colleague, Carolyn.)

In fact, I’ll wager that most will think my 3-hour adventure at the salon was a waste of time. But it was not! For a variety of reasons:

Curious about the results? Well, here is the before and after. (And yes, the “after” is my new driver’s license photo – not as lovely as my last one, I might add.)

My “before” EXTENDED hair

The longest locks of my life!

Unfortunately, I must EXTEND the story a bit because I did NOT like such long sides – didn’t flatter my face like I had hoped. Unfortunately, the only thing that will make my FACIAL cheeks look thinner is to shrink them via the four-letter word that starts with “d” and ends with “t.” So I went back to sweet Jess and asked her to trim the extensions, which she did.

Silly as it may seem, I’d do it again but I won’t do it again. Make sense? I found out I’m just a short-hair girl, and I don’t even think I’ll keep this style much longer. In fact, I just might go back to the super bouffant of yesteryear. And order it in light brown. So long!

Today was a good hair day. Why? Because I enjoyed a great “hair-raising” experience – got the locks cut ‘n colored, and I really like how it looks.  (I’ve had enough BAD HAIR experiences to write a book.) Jessica, the WonderGirl of Amara Day Spa, Boutique , AND Salon,  not only trims my hair, but she actually STYLES it! Not many hairdressers have been able to do that to my satisfaction since my days in high school.

I remember when going to the BEAUTY SHOP for a fancy do was a MUST before attending semi-formal or formal high school dances. 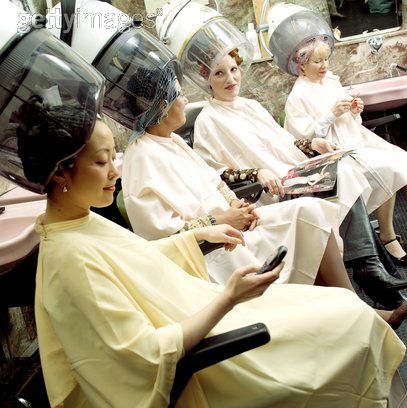 Teen girls, bedecked in plastic rollers, sat in a line of chairs with attached hair dryers in nearly every salon in Pocatello – much like these nameless ladies in the photo. After that warming experience, our hair was “

I remember the beautician who styled my first bouffant also created swirls of curls on top. Using half a can of hairspray,  she actually “glued” glitter amongst my boring brown locks. (This photo is a VERSION of the SPARKLING hairstyle, but WITHOUT the glitter.)

I loved the results, but my date was probably less than impressed when sparkles fluttered to his shoulders, leaving behind a version of shiny dandruff. Of course that wasn’t the only thing that ruined the date.

(Does anyone reading this post remember the older beauty shop patrons who made weekly trips to the salon and would NOT wash their hair between visits? In fact, they hardly even combed it because the style was set in stone via Aqua Net Hair Spray. Urban legends about spiders nesting in beehive hairdos were favorite topics around the dinner table. YUCK!)

Now, some 46 years later, I hustle in to the salon about every 6 weeks.. Jessica slaps some hair color on my graying roots while I avoid eye contact with the woman in the mirror because her double chin and jowls enlarge and droop more at every glance. Next, Jess sticks my head under a hood that steams the goopy hair, and 1/2 hour later, she washes out the slime.

Before trimming my darkened locks today, I showed her a picture of the CARTOON ME that graces the front page of this blog. Yes, I asked her to cut my hair like a comic version of myself that really doesn’t look anything like moi. But lo and behold, the woman worked wonders drying and round brushing my fine hair into a great facsimile! I really like it  A LOT! (I only hope I can re-create it, which I know I really can’t.)

What pleased me the most, however, is that the cheeks, chins, and jowls of that woman in the mirror receded a bit, and the round face seemed to lose  an ounce or so. BUT not enough to tempt me to take a picture of myself for this post!

Nevertheless, I THANK  Jess for the GREAT HAIR DAY!

I still like to read newspapers – not as avidly as my husband – but if there are sections strewn throughout the living room or kitchen, it will take me 30 minutes to pick ’em up, stack ’em up, and throw ’em out recycle ’em. Why so long? Because I can’t go through that process without scanning headlines, skimming 3 or 4 articles, and pouring over at least one story, commentary, or feature.

This morning, I delved into Ann Cannon’s column – “You’re a Pill; Old-fashioned words sought.” I enjoy reading Ann; it’s a lot like reading a blog – but I can tote her words with me into the bathroom. And if I spill diet A&W Rootbeer all over her weekly wisdom, the mess won’t forever end access to future Ann Cannon columns like it would if I dumped a beverage onto my laptop. (It just occurred to me that Ann must also host a blogsite. Wait here, while I check it out. — Hey, she DOES! The Writer’s Corner (and also what I ate today). It’s nearly as fun as her column!)

Although I’m older than Ann, I’m younger than her parents – BYU’s Lavell and Patti Edwards. Still I relate to her experiences and agree with most of her opinions, especially about raising boys. (She has 4 boys, no girls; I birthed 4 boys and no girls but now claim 3 daughters-in-law and 5 grand daughters! )

The other thing I like about Ann’s columns/postings is that she pretty much avoids controversy. I’m not sure why she does, but I know I am scared spitless of topics that raise hackles and inspire cantankerous comments. Look what happened to poor Scott Pierce when he stuck his neck out and wrote about the David Letterman/Sarah Palin battle. The last time I checked, 146 comments were listed! And many of them were nasty, Nasty, NASTY! Scott claimed to be cowardly because he didn’t approach the topic sooner. I don’t know WHY he thought it was safe to plunge in today, but it wasn’t! The sharks were just hidin’ in the reef waiting for him to dip his big toe into the cesspool.

On the other hand, Ann’s “call-to-action” (send in old-fashioned words) has only pulled in 9 comments, but could there be a safer subject? While I have weighed in on controversial issues like bad and good mothers, I usually don’t because I feel uncomfortable even COMMENTING about debates. I fret enough over sounding intelligent when I post a comment, so I don’t want to start looking over my shoulder for conservative/liberal, Republican/Democrat, BYU/Utah, traditionalists/feminists aiming poison pens at my unsuspecting back, too! VERY SCARY!

Today, however, I rallied to Ann’s cry for old-fashioned words. And here’s a revised version – revised because on MY blogsite, I can write more than the 200-word limit required by the Deseret News website! So the following is what I WOULD have submitted had Joe Cannon allowed me a sufficient number of words!

Another rather archaic term – besides the old-fashioned word “pill,” that refers to sulky children – is “Good night, Nurse!” – always uttered in exasperation. Perhaps patients frustrated at being awakened for yet ANOTHER shot or pill, originally growled the farewell in a thinnly veiled attempt to articulate their irritation to the attending medic. (As the nurse exited, she probably mumbled under her breath, “What a pill!!!” And yes, I am assuming that the nurse was female because in the hey-day of “good night, nurse,” the majority of nurses were women.)

“Punk” was one of my Grandma Barrett’s favorite terms, used to describe her state of mind. Before you imagine a little old lady with a 10-inch blue-haired Mohawk, wearing a leather vest, I must explain that Grandma was communicating that she was feeling under the weather. “I’m feelin’ a little ‘punk’ today,” she’d whisper as we dropped by for the first time in a week. (Grandma sometimes felt a little “punk” when she needed to lay on a little guilt, too.)

Then there were “Mormon” slang terms like “flip,” which has now been replaced by “Omiheck.” Missionaries often returned from the near-east or Far West with that classy expression embedded in their vocabularies! (“Flip! I can’t believe how every girl on campus wants her M.R.S. degree!”)

Descriptive terms have changed, too, but so have the objects they described. A “D.A.” (short for duck’s a**) or “ducktail,” worn by “greasers,” was a long, greasy haircut that swirled into a curl in the middle of the forehead and an up-sweep in the back. Of course, there was a girl’s version of the ducktail, too.

The “beta” haircut was a precursor to the Beatle haircut and featured long, swooping bangs, but was cut short above the ears. I could not find a reference to this early ’60s cut, but I think it originated on college campuses, and fraternities spawned the “beta” reference. The best beta cut belonged to teen matinée idol Troy Donahue. Sigh.

Before ending this rather random post, I need to tell you I searched for a few sources for old words beyond what my memory could provide, and found one to be Ann’s own blog. This is just a little ironic because she indirectly mocked her husband for calling their Newfoundland a “pill,” but in The Writer’s Corner, she asked “WHAT IN THE SAM HILL ARE THESE PEOPLE THINKING?” (You don’t hear that reference everyday, and just who in the Sam Hill is Sam Hill?) In another entry, she proclaimed, “That would be a grand gift.” (My Grandpa Barrett was the last person who regularly used “grand,” and he’s been gone for 25 years.)

Let’s face it, Ann likes those old-fashioned words enough to use them. And so do I – most of them anyway. They take me back to a place or a person, an incident or a dream – grand times I can retrieve in memory only.