While looking back through some of my earlier posts last night, I re-read my tribute to my mom and dad on the 65th anniversary of the day they wed. Nearly a year has passed and so I thought of another way to honor their love story. Hope you like it!

P. S. Tagxedo is sort of like wordle.net but I like it better because you can “shape” your words. Most of my Wordle creations looked like potatoes; whereas Tagxedo shapes the story!!

In Georgia, March is the month of blooming dogwoods and azaleas, but here in Utah and other not-s0-warm states, it is the month of brown and gray. Brown lawns, hills, mountains, dirt. Gray clouds, skies, and moods.

Gone is the white snow that creates a pristine landscape – except for those days where Old Man Winter blows in for a minute to remind us that spring’s arrival is delayed again. A few hearty crocus and daffodils dare show their colors to challenge snow-mixed-with-rain and bipolar temperatures, but most tulips are just sticking out their toes before taking the leap.

And then there are the pansies – those darlings that shiver and shake through November, December, January, and February to show the world that winter can be survived and spring will come again.

While I planted 90 tulip bulbs last fall, I didn’t put any pansies into the ground, and I missed their little promising faces peeking up through snow and dirt throughout those winter months.

Tulips are great and all, but their dormancy tests a gardener’s faith – will they truly show up, and how many will decide to keep sleeping? (Right now 62 of the 90 have broken through. What happened to the other 38??? Did I plant them too deep? Did I plant them upside-down? Is that possible?)

Today, G.E. brought me flowers for anniversary number 42!!! But he also bought AND planted pansies to fill up that vacant spot of garden dreariness. Which brings me to the brightest spot in March – the day I married the man I love!

G.E. cuddling with one of our 10 grandchildren!

A Tribute to Momma and Daddy on Their 65th Anniversary

This morning I once again awakened to G.E.’s favorite station: classic country. Maybe it was B.J. Thomas singing the crossover hit, “Whatever Happened to Old-Fashioned Love?” or a country singer I don’t know, but the melody and a few lines of the song stayed in my head and then moved to my heart.

It was appropriate. Sixty-five years ago today, my mom and dad stood before a Mormon Bishop in Champaigne, Illinois to recite their vows of matrimony. Dad’s army buddy and his wife, Mom’s new friend, witnessed the ceremony as the best man and matron of honor.

That was it. Five people, including the fresh-faced groom and the stunning bride. Simple. Tender. Romantic.

Mom has mentioned a time or two that she regrets leaving her mother and father behind in Pocatello to make the cross-country trip to marry her soldier boy, but NO ONE could have changed her mind then. The two had been apart for two-plus months, and that was long enough. Too long.

They met on March 24, 1945, engaged 3 days later, and married on June 1st. While waiting at the Illinois train station for Dad to pick her up, Mom recorded her excitement in a letter to one of her 9 brothers. Even the words on the paper are breathless in anticipation, and the last scribbled line reads, “Here he comes; got to run!” 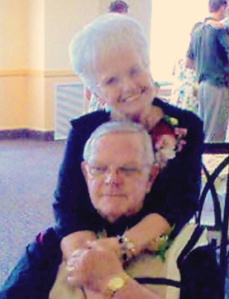 I don’t have to close my eyes to picture those two running to each other. I can see my 6 foot 3-inch father lift his Becky – all 5 feet 3 inches of her – into his arms and kissing her JUST LIKE IN THE MOVIES!

But their life together was much better than any MGM production because their love was real and lasting. Connie and I never tired of listening to “their love story,” and Daddy never tired of telling it. Up to the day he passed away, he reminded us that he loved our mother the first time he saw her. From that moment to this, their love has lasted “through the trials; through the smiles; through the tears,” and now on into eternity.

I love you so much Momma and Daddy!

Last week, G.E. and I celebrated 41 years of marital …. hmmm? Bliss? Well, NOW we enjoy more blissful days than we did long ago and far away. Joy? Psalms reminds us that “weeping may endure for a night, but joy cometh in the morning.” So yes, we endured some nights of weeping, but we’ve also experienced the joy that comes with the mornings. Humor? O my YES! Without a doubt, our marriage has been filled with laughter, and that is what helped us work through the less-than-blissful days and the tear-filled nights.

So, how did we celebrate 41 years together? I wish we could say we visited the Trevi Fountain in Rome or the canals of Venice. 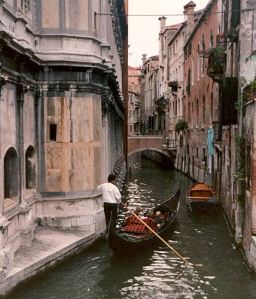 But money – or the lack thereof – and timing prevented such a celebration. Instead, we settled for the next best thing!

WHOOPEEE?!? At the last moment, G.E.’s boss sent him south to the capital of glitter and gambling. While neither appeals to us boring folk, a get-away to warmth and sunshine did! In our beautiful room that we paid to upgrade, I kept busy sleeping in, reading books, blogging, AND doing a little bit of work – I know that shouldn’t happen during a vacation, but the unexpected timing necessitated the intrusion.

During the afternoons, the two aging lovebirds walked Las Vegas Boulevard with other oldies on spring break, and we DID visit the Trevi Fountain AND the canals of Venice Vegas– as in casinos. NOT quite the same experience, but what the heck.

"Three Coins in a Fountain"

No, that's NOT us seated in the gondola!

We even took a side trip to Troy to see the BIG horse!

We also enjoyed some YUMMY meals and ONE funny mishap. Yes, I managed to lose track of my cell phone within minutes of arriving at Caesar’s Palace. Didn’t even miss it until son Joey called G.E. at 7 A.M. the following morning:

Joe (trying NOT to laugh): Hey Dad, sorry to bother you so early. But Kara got a text message from security at Caesar’s Palace.

Joe (still chuckling): Do you know if Mom has her cell phone?

Joe: Last night Kara sent texted Mom to tell her the health care bill passed, and at 3 A.M. THIS MORNING, her phone beeped and she found a REPLY message from Security! (more snickering) Anyway, it asked if we knew the owner of the cell phone. And if so, could we notify that person to pick up it up.

Me (sounding sleepy and confused): Yes, it’s in my purse. What’s going on?

G.E.(snickering and ignoring the question): Are you sure?

Me (climbs out of bed and heads for purse): I’m pretty sure. Who is that? What’s happening?

G.E. (still ignores questions and returns to phone conversation): She THINKS it’s in her purse. (continued laughter) She’s still looking. Okay, thanks, Joe! Sorry they disturbed your sleep. Have a great day, Son. Love you and thanks for making my day! Bye.

Me (searching madly through purse): What’s going on? (Five or 6 minutes of digging through the purse, suit case, and bathroom; now thoroughly frustrated) “TELL ME WHAT’S HAPPENING? WHERE IS MY GOSH-DARN PHONE?”

The thrill of watching my panic unfold finally plays out, and G.E. shares the details of Joe’s call. Ha ha. 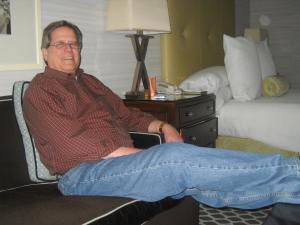 Kicked back and smuggly enjoying my distress!

Of course, this wouldn’t be all that funny if such an exercise was a rare occurrence in my life, but IT HAPPENS ALL THE FREAKIN’ TIME!!! However, I was grateful that I didn’t have to suffer for more than 10 minutes. I hadn’t even missed the dang thing! 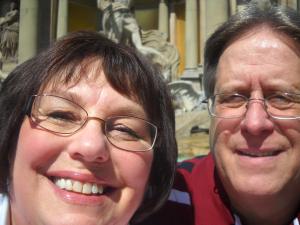 Chubby and Hubby - together FOREVER!

The remaining days passed without incident, and we really enjoyed a romantic, quiet escape from the crazy busyness of our day to day lives. Oh, and we didn’t miss a chance of telling people – servers, security guards, concierge – that we were CELEBRATING 41 years together. It was fun to see their reactions and receive their congratulations in a city known for quicky divorces! GOOD FOR US!